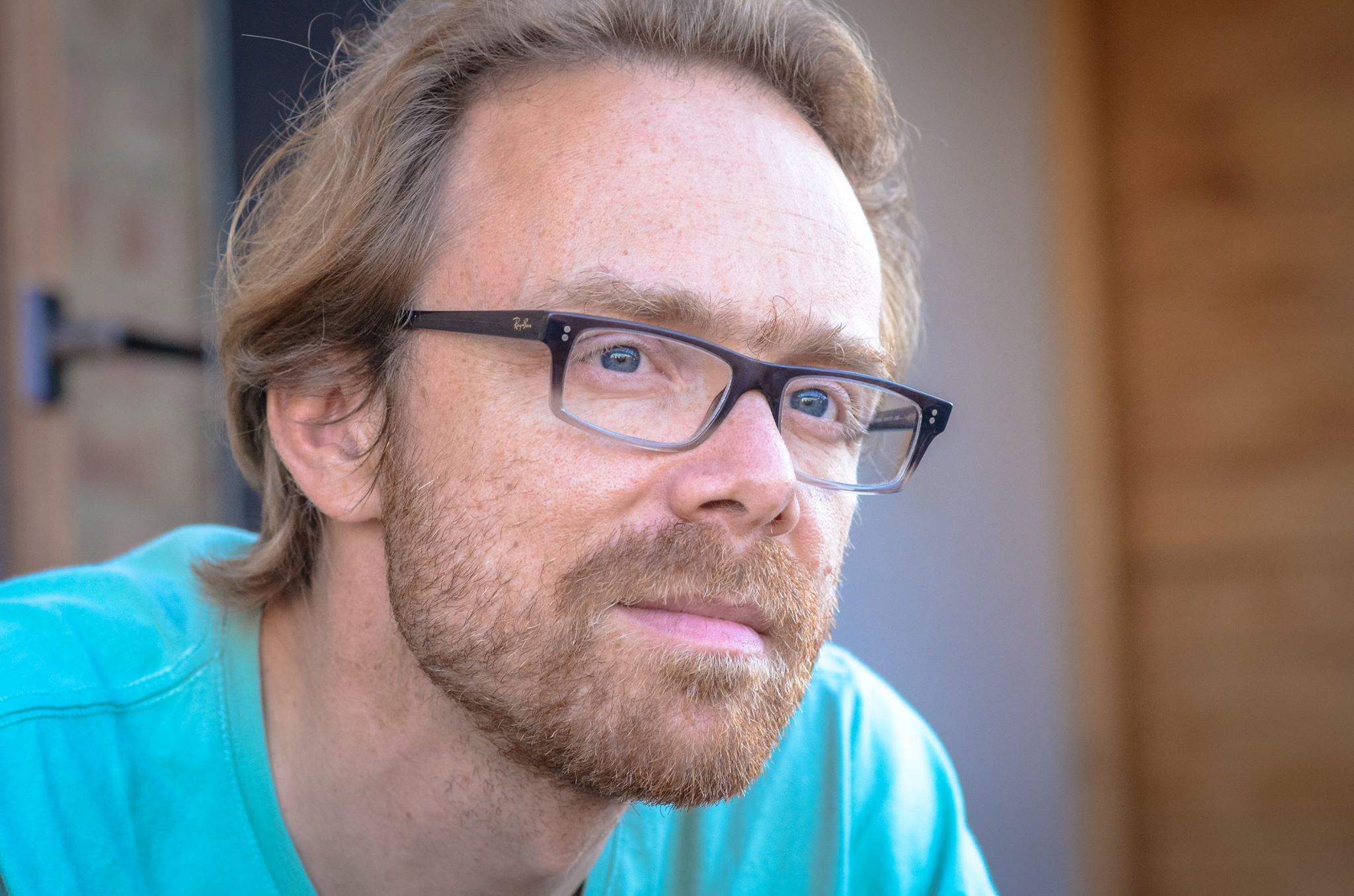 Kafka Streams is a lightweight data processing library for Kafka. It's build on top of the Kafka consumer/producer APIs and provides higher level abstractions like streams and tables that can be joined and grouped with some flexibility.

One current limitation is the lack of non-key table join, i.e. impossibility to join 2 tables on something else than their primary key.

This post discusses approaches to work around this limitation.

An example implementation of my suggested approach is present on github: https://github.com/sv3ndk/kafka-streams-one-to-many-join

Imagine a scenario with cars moving around a city. We receive two streams of events: the position of the cars in real time and the pollution level in various locations, along those simple formats:

Our purpose is to maintain a view with the latest known position and pollution level exposure for each car:

The twist is that we want to update that view as early as new information is available, i.e

The next section will present my suggested solution based on the current version of Kafka Stream. Before that, the present section discusses 4 other approaches that each change a bit the problem definition before solving it (sometimes, the solution to a hard problem is to solve another problem...).

One attempt could be to maintain the latest pollution level per zone in one KTable and simply join the car location event stream to it, as follows: 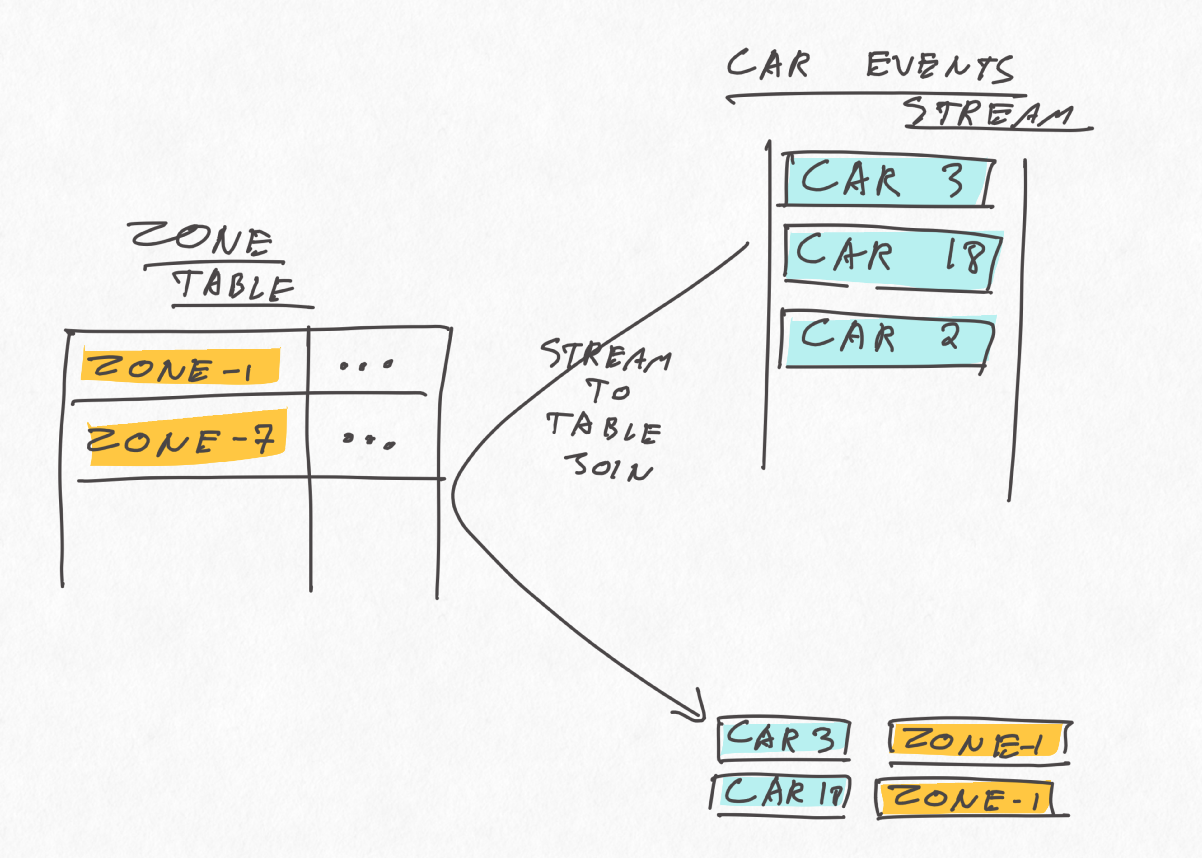 The only kind of joins that gets updated whenever either side receives an event is a KTable-to-KTable join. As mentioned in the introduction, those joins are (currently) only possible as equi-join on the primary key.

One somewhat hackish solution consists in building a "wide table" of car events, keyed by zoneId, and join it to the zone KTable, as follows:

This should work and be updated as often as we want, but can quickly be very inefficient due to:

If the expected number of car events per wide row is high, this can lead to unacceptably low performance and high resource costs.

We're not alone! A PR by Adam Bellemare is currently on its way to Kafka that should hopefully resolve just that! The latest version of Kafka at the time of writing this is 2.2, let's keep an eye on it.

4) Other engine: use Flink!

Flink is not as lightweight as Kafka Stream: it's a full-fledged streaming platform and typically requires a more involved deployment setup. Both tools are thus positioned differently and comparing them here is not totally fair.

Flink is an appealing option though. It has a very rich stream processing API that addresses both batch and streaming paradigms, integrates with Kafka as well as many other data sources, has a convenient savepoint feature and can be deployed to variety of runtime environments (k8s, standalone, AWS,...).

Back to our example, table-to-table joins support more flexible predicates in Flink, "only" requiring that the join includes at least one equality condition (thus not necessarily on the key).

Waiting for KIP-213 to reach Kafka Streams's trunk, or simply as an illustation of the possibilities that state store range scan opens, here's a solution based on Kafka Stream's low level Transformer API.

This solution is heavily inspired by this awesome talk by Antony Stubbs (minute 13:48) as well as well as this stream-to-table join example by Michael Noll.

The basic idea is to use a tall format in a state store instead of the wide format of the KTable of the second solution above: 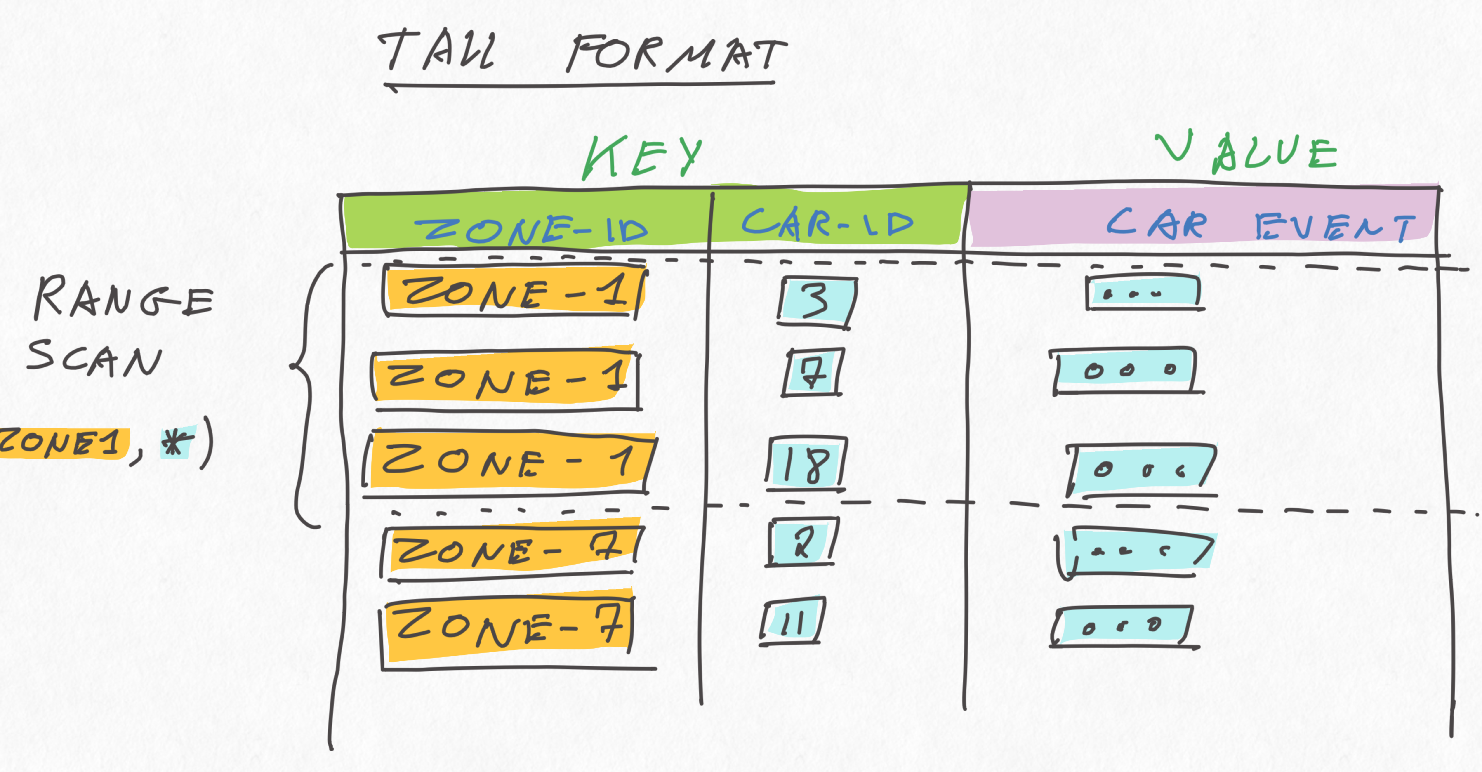 The tall format has the advantage of avoiding the write amplifications mentioned earlier, while still allowing to retrieve all the car events per zoneId with a range scan. In a way, it is kinda similar to wide rows in Cassandra (without the sorting).

Armed with this, we can store the car events following this tall format, while keeping the zone events keyed by zoneId as before. This yield the following stream overview: 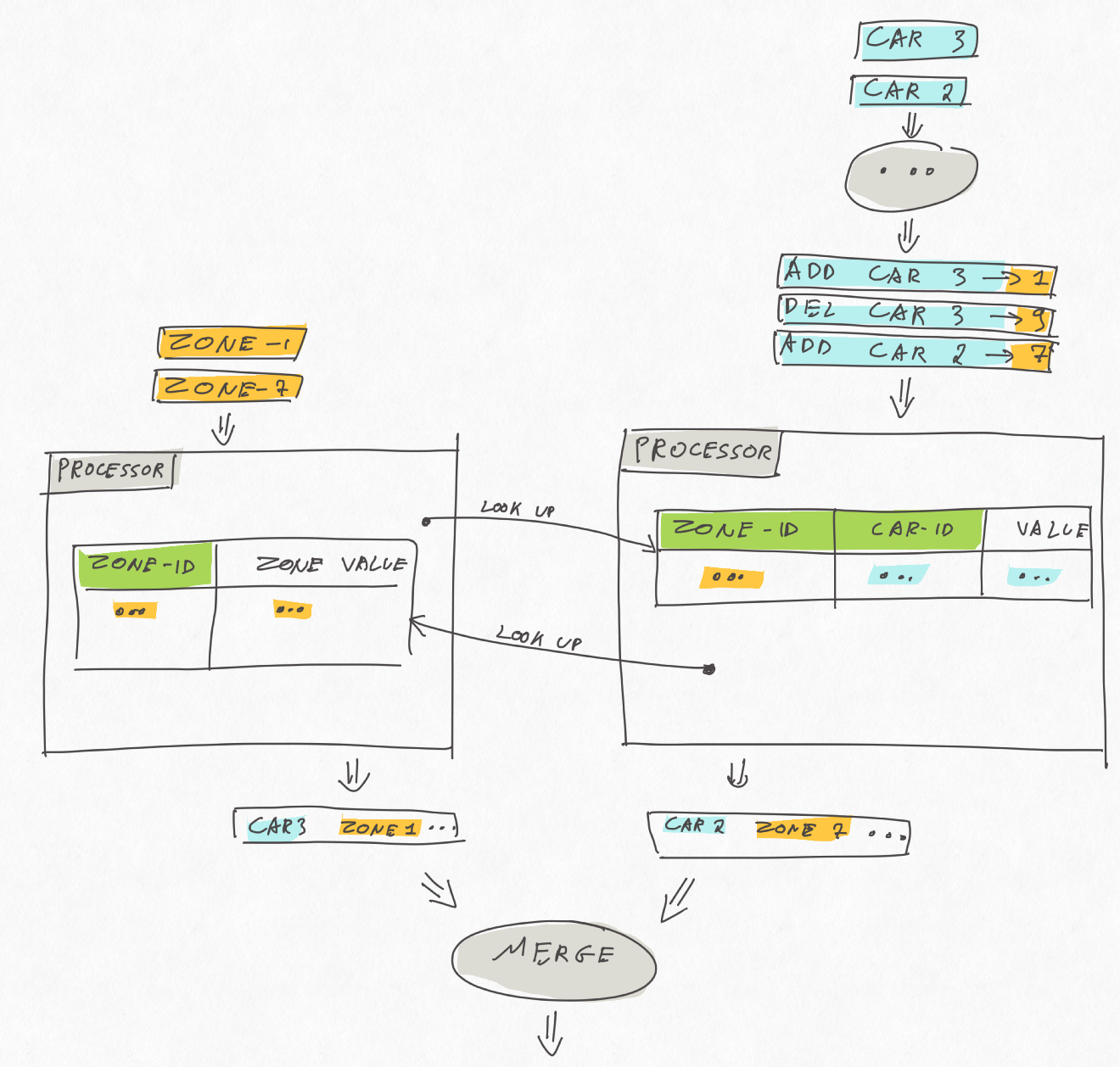 I implemented this with the Transformer API. The state store for the zones is a usual key-value state store:

Whereas the state store for the cars is similar, but uses a composite key:

Car events are partitioned by zone, then forwarded to the CarEventLeftJoinZone transformer, which stores them, looks up the corresponding zone in the zone state store, and, if all goes well, emits a join result immediately:

The pattern is very similar for the ZoneEventLeftJoinCar, except that the look-up in the car event state store is a range scan, potentially matching many car events for a given zone.

You might have noticed that the car event processor receives ADD and DEL events instead of the raw car events. That's simply necessary to make sure each car is (eventually) recorded in only one zone at the same time.

Again, for all this to work properly in a distributed fashion, we have to make sure that both streams are co-partitioned by zoneId.

One last word: only use streaming when batch is not an option

This post has provided an example of a processing which is trivially easy to implement with a batch approach while currently requiring substantial work with some current streaming solutions.

In theory, "batch is a subset" of streaming, in the the sense that stream processing manipulates unbounded datasets while batches manipulate bounded datasets, which can be considered as a specific case of unbounded ones. Also, modern streaming paradigms like Beam, Flink and DataFlow provide abstractions to manipulate the stream's "logical time" (or event time) explicitly. Those frameworks allow to build low latency continuously updated views that eventually converge towards the exact result (cf the so called "Kappa" architecture).

When this low latency is required or when the streaming nature of the processing is otherwise justified, that is pretty awesome.

In practise though, for some use cases, this can come at a substantial complexity cost, essentially because a batch job have the luxury to traverse fully a bounded data multiple times, there are many use cases which are much easier to implement in batch (like non equi joins, some complex nested queries or ML training).

I don't see streaming fully replacing batch processing any time soon. What we need is building streaming platforms where both can co-exists and share datasets efficiently.